Move Over, YA Dystopia, YA Sci-fi is Here to Stay

“So, Ang, what genre is you book in exactly?”

I am glad you asked! My book best fits into the genre of Young Adult Science Fiction, a small genre that, in my opinion, is highly underrated in the age of YA being the most popular type of book on the market. There are hundreds of thousands of books under the categories of YA dystopia, YA fantasy, YA romance, etc. etc. but only rarely do I see a true YA sci-fi.

This, I believe, leaves a serious gap in what should be a relatively gap-less genre. Young Adult fiction is popular with just about everyone. I know almost as many middle-aged mothers that love YA just as much as their kids as I know actual YA-age readers, if not more. YA reaches a huge, diverse, and unmistakably important audience; so why is it missing one of the biggest, most long-lasting genres in human history?

Before we continue, I must point out that, yes, a lot of YA dystopia can fall under the science fiction umbrella. The Hunger Games and Maze Runner are two candidates for this argument. I argue, however, that it is not true science fiction if it is a dystopia. It might be part science fiction, but just as a Labradoodle is not pure Labrador or pure Poodle*, a sci-fi dystopia is not pure science-fiction. It is an entirely different creature with good traits from both of its parent genres.

When I speak of sci-fi, I refer to a genre that has the following traits:

Optional: a deep exploration of human ethics and morality.

Now, none of this means that dystopias are bad at all. Dystopias are an important type of story, but there is a marked difference between YA dystopia and YA sci-fi. Both genres are great and have their audiences, but my focus for the Aristotle & Sons series is sci-fi as described above, but with more of the youthfulness that the Young Adult part of the genre brings.

So, why are YA sci-fi so difficult to find? I think the problem is as simple as popularity. A few years ago, the hip thing was YA supernatural stories — think Twilight — and now it is YA dystopias. It all revolves mostly around whose sub-genre has had a major movie made, but there is no real reason why YA sci-fi is not flying off the shelves at an alarming rate.

In some ways, this is great for me, who insists on being entirely strange and unusual when it comes to both fashion and chosen genres to write in. My goal with Aristotle & Sons is to not only broaden the market for YA sci-fi but to hopefully introduce an entire audience to just how great sci-fi can be.

*Author’s Note: I typed ‘Doodle’ in an earlier draft of this instead of ‘Poodle’ and I’m still laughing about it. 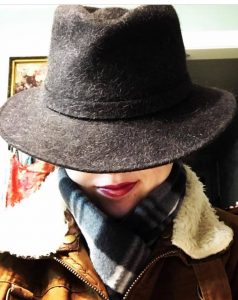 “Writing one’s own Author Biography and keeping a straight face while doing it is not only difficult, but entirely undignified.” – A.N.G. Reynolds

Stay tuned for updates on the first Aristotle & Sons novel, out December 15th, 2018.